Sorry if this post sounds vaunting: I now formally hold an MA in political science. Alhamdulillah. I began my program in August 2014 and finished on April 29 2016. I remember during my orientation days in Bali back in the mid 2014, a senior told me that my time in the US would be the quickest time I can ever imagine. “So try to get the most out of it, you’ll be surprised when you finish” he said. He is right. Time flies so fast and all of a sudden I am now on the verge of my departure to Indonesia. But I am not that sure if I’ve used my time here to the best I can. I could have done better if…(well, too late for excuses :)). But anyhow, I am counting my days in the US.

Building on my previous post about “stable regime” and its relationship with economic development, I figured that I haven’t made my mind clear yet. It was vague terms what do I actually mean by “stable regime” and “development.” In fact, both can be disaggregated into different levels of category. Stable regime could be associated with (1) whether or not a regime change takes place; (2) whether or not protracted intrusions appear to destabilize a government ensue. So stable regime could mean an unabated government that lasts up to today without serious contentions outside ruling government/party. Think about North Korea, China, or Singapore, for example. The three countries have been governed from the same regimes/parties since they got independence (or China at least since 1949).

Other than that, it remains hold that regular competitive elections have less to do with regime change. In democratic countries, chief executives came from one party to another through elections. They were elected via popular votes. But despite governments have changed via elections, regime persists. So a government does not necessarily mean a regime. According to Schmitter and Karl (1991) “A regime or system of governance is an ensemble of patterns that determines the methods of access to the principal public offices; the characteristics of the actors admitted to or excluded from such access; the strategies that actors may use to gain access; and the rules that are followed in the making of publicly binding decisions.” In their definition, I cannot help but think government as an actor, as a verb that has to do with “governing” activities whereas regime is more an adjective, a word to be used to attribute “an ensemble of patterns” in government.

Polity data allows me to examine the impacts of “stable regime” to my outcome of interests on development. There was a section called “regime durability” in the dataset that defines stable regime exactly as I wished to do. It defines regime durability as the number of years since the latest regime change takes place or the end of unstable periods either from democracy or authoritarian. It was started since 1800 to 2014, covering 199 countries and polities throughout the world. So for example, Indonesia underwent a transition from “new order” to democracy in 1998. It means that its democratic regime has lasted for 18 years. While the United States has arguably never been ruled by an authoritarian regime as Indonesia had. The US regime has lasted since all the way back in 18th century (it has been lasted for 214 years using the Polity’s definition). China’s regime has endured for 65 years and 49 years in Singapore.

Additionally, there are some other possible predictors that may affect governance. The enduring colonial legacies have been seen as a source of underdevelopment in the Global South (see the works of Acemoglu & Robinson). It is also possible that the choice of either democracy or authoritarian institution affects your governance. The same is true for the choice of presidential and parliamentary system. 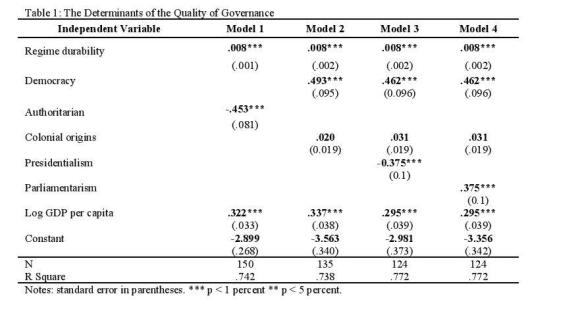 As you can see, regime durability has positive results in all proposed models, even after we control for other possible predictors. Authoritarian regimes tend to have bad governance than democracies. Colonial legacies have arguably no impacts on governance, (well ok, this might not be problematic because I used countries of origins instead of specific colonial legacies from colonizers). And as you might expect, the levels of GDP per capita (I used log measurement) have all positive results in 4 models.

If the results withstand, these could be a good start explaining the importance of regime durability on governance. We have to find what are the rationales behind these results which must be non tautologies from economic development/modernization explanations. Regime durability must also be treated independently from the regime types (democracy/authoritarian/hybrid). I’ll post again on this later on. Just keep watching this space.

Error: Twitter did not respond. Please wait a few minutes and refresh this page.