We often tempted to characterize millennials as a new voting block as opposed to older generations. This is especially true in Indonesia, where young people comprise a big chunk of its population. But how different actually millennials are? Our common understanding mostly said that millennials are more open, more tolerant, etc. But the recent CSIS survey on millennials surprisingly revealed much more bleak depictions about their social and political attitudes. Prompted by the recent Jakarta’s election wherein the Chinese incumbent candidate’s Basuki Tjahaya Purnama was beaten badly by the Islamist supported candidate’s Anies Baswedan, we asked the following question: “Would you be willing to accept a leader whose religion is different from your own”? Bear in mind that around 90 percent of Indonesians are Muslims. So this question essentially indicates their willingness to be led by non-muslim. The result shows that around 54 percent of millennials rejected this idea, compared to only 39 percent of them who said the opposite.

Another question asked their attitudes towards minorities such as LGBT member. The survey asked: “Would you be willing to accept LGBT communities”. Though it might not be surprising to see the majority of youth in Indonesia will confront the LGBTs, but knowing that around 95 percent of them cannot accept LGBTs is still startling, at least for myself.

There are a bunch of other questions in the survey that will prompt you to think twice about how different actually millennials are. 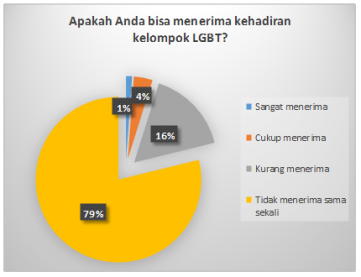 I wrote a piece in the Jakarta Post the other day, arguing that the recent banning of HTI was inherently flaw. Here is the full article if you want to take a read: https://www.pressreader.com/indonesia/the-jakarta-post/20170818/281685434956980

Error: Twitter did not respond. Please wait a few minutes and refresh this page.